Recently shared with me...

"Let’s remember Kim Wall by the great journalism she did and the impact she made.


Interview on WNYC
The Crumbling, Leaking Radioactive Dome in the Pacific
http://www.wnyc.org/story/crumbling-leaking-radioactive-dome-pacific"

Twitter Banned Bisexual, But We've Won This Before (receipts within)

"Google restricts ‘bisexual’ from autocomplete because of correlation to pornography", Pasadena Star News

"Twitter apologises for 'technical issue' that blocked searches for 'bisexual'", The Guardian

"Twitter is fixing an error that removed ‘bisexual’ from news and photo search results", The Verge

"Search for 'Bisexual' on Twitter Right Now, and No News, Photos, or Videos Show Up [Updated]",


WHAT I CONSIDER THE GOOD NEWS FOR THE MOMENT
Huge massive response led by @stillbisexual, @binetusa, and many others! News articles aplenty! AND, THE BEST NEWS? Prior images from bisexuals are still on the Twitter media server as evidenced by the media links from #biweek still serving beautiful bi, pan, fluid and queerness.

Like 2016's most popular image, our home page for bisexualweek.com, which takes on new meaning today: 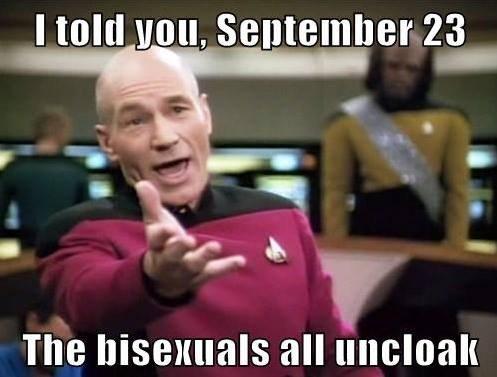 I've embedded the spreadsheet below and you can download this sheet here in case you delight in bisexual images of proud bi people and their cats, owls, and kids as much as I do.

Here's hoping this is the last time we'll have to scream and plan protests to reclaim the very use of our name!

#EndBiBans
By Faith Cheltenham at November 09, 2017