Jasmyne Cannick, who worked with Washington on the Pan African Arts Festival, said she's infuriated ABC booted Washington from the show's upcoming fourth season for calling Knight a "faggot" during a scuffle on the set and believes it smacks of racism. So she's launched a petition - which had 1,233 signatures as of last night - to get the actor his job back.

The petition says Washington's firing "further adds to a disturbing new trend at ABC wherein minority actors have been dismissed at an alarming rate over the past two years. Blacks, including . . . Star Jones ('The View'), Harold Perrineau ('Lost'), Alfre Woodard, Mehcad Brooks and Page Kennedy ('Desperate Housewives') have been let go . . . One must ask themselves, what is going on? . . . While we don't approve of [Washington's] use of the F-word at the Golden Globes, Washington has since apologized and gone on to perform community service by way of a public service announcement for the very organizations that have been orchestrating his dismissal. But it seems it wasn't enough."

I know and have known Jasmyne for years, she's one of the strongest leaders the BlaQue community has. Still I don't agree, I think it odd to separate my identity. I am black and queer, you say faggot we fight. You say nigger we fight.

After years of rumor of I.W's tirades on set, including his altercations with women actors...I wish she'd chosen a better example than him. I stopped listening to Em when he was full of fag words, but because I'm black I'm supposed to take the angry black man's side no matter what? Say it ain't so, say it ain't so!
By Unknown at June 19, 2007

Email ThisBlogThis!Share to TwitterShare to FacebookShare to Pinterest
Labels: queerness, race, tv, we need a revolution

No, we're not past this but THANKS for mentioning it!

But after Jolie was cast, some black actors were shocked that the white actress would play Pearl, who is of Afro-Cuban and Dutch descent. Jolie tells Newsweek, "I know that people are frustrated at the lack of great roles [for people of color], but I think they've picked the wrong example here."

Adds Pearl: "This is not about skin color. I wanted her to play me because I trust her. Aren't we past this?" - People.com

Personally, I understand and GET it...but thank goodness AJ is aware (as usual) how things can be perceived! There's a bunch of great biracial actors out there!
By Unknown at June 19, 2007

Email ThisBlogThis!Share to TwitterShare to FacebookShare to Pinterest
Labels: angelina, film, we need a revolution 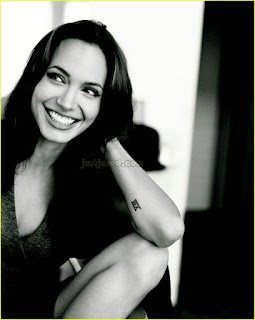 (PHOTO FROM JUSTJARED.COM, SUPPORT ANOTHER BISEXUAL AND PICK UP ANGELINA JOLIE ON THE COVER OF MARIE CLAIRE!)

With 100 percent of precincts reporting Tuesday night, Micah Kellner was declared the new state Assemblyman for the Upper East Side and Roosevelt Island. Kellner, a Democrat, beat out Republican Greg Camp with 64.36 percent of the votes to fill the 65th District seat left vacant by former Assemblyman Alexander "Pete" Grannis. Grannis served for more than 30 years before leaving to become the state's environmental conservation commissioner.

A former congressional aide, Kellner was endorsed by Senator Hillary Clinton and the Gay and Lesbian Victory Fund...The 28-year old Kellner is the first openly bisexual member of the state Legislature to be elected.

Every day it gets better and better for us bi's, good for him! And a disabled rights activist, hot good goddamn - - Where's the Michah Kellner Fan Club, can I be a member?

MORE QUEER NEWS OF NOTE, CHECK OUT SMART BRIEF YO!

MORE ANGELINA?
Read the thoughts of her partner (along with his buddy George Clooney) on their new film, Ocean's Thirteen

I'm curious what you think of the state of the male movie star in Hollywood right now.

PITT: I'm actually a woman trapped in a man's body. We're going to be doing something about that soon.

Is Angelina aware of this?
PITT: Yeah, she's all for it. Kinda into it, actually.

OR READ THIS LOVELY QUOTE FROM HER:

"I love women and men equally and I see people and love as love, so I think it makes sense that a woman would know I'd appreciate and love her as much as I would a man."

OR LEARN SOMETHING YOU DIDN'T KNOW BY WATCHING